With the support of mixed reality and virtual reality technologies, employees and robots can work together across locations.

Together, tasks can already be solved flexibly and in real time. Virtual reality is also becoming increasingly important in industry. Objects are represented in a three-dimensional virtual representation. Users can interact with a robot or employees there. The operator controls the processes in a virtual reality environment with his gestures. In a human-robot collaboration, robots then execute the commands that the operator sends from virtual reality to the identical system in reality. They grip and move objects on site in reality. This offers employees the opportunity to act across locations. Similarly, an operator can use the same technology to train other employees virtually on processes.

The same information used in Virtual Reality can be displayed directly in the field of vision of skilled workers via mixed reality glasses like Microsoft Hololens. For example, employees can view assembly plans or test procedures directly on site. This allows them to move around the workplace hands-free and provides continuous support in making decisions. Quality assurance measures can be implemented more effectively. At the same time, production steps are digitally networked. This not only makes production more flexible but also makes it more efficient.

Technicians can already be guided through repair tasks. HoloLens displays all information necessary for the repair of a machine. This means that even less experienced technicians can carry out tasks unerringly with the instructions through the data glasses. HoloLens is data glasses that display holographic elements in virtual space. The control is intuitive, because the user communicates with 3D objects very simply via speech, glances and gestures. Not only defective components can be displayed, but also dangerous areas can be pointed out.

Virtual and Mixed Reality already in use at SCA 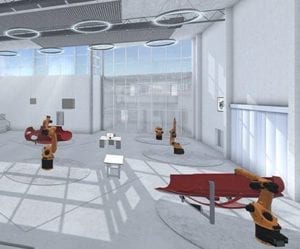 SCA is already taking advantage of virtual reality in the industry. In an exhibition centre, the value chain of machines and robots in customer contact is to be represented. Virtual Reality and Mixed Reality will be used for an exhibition and training centre. In Virtual Reality, faithful reproductions of the company’s own adhesive robots are displayed here in the virtual space for sales and marketing presentations. The machines in 3D space could also be displayed simultaneously in real locations using, for example, Microsoft HoloLens. The solution enables several users to interact with the machines virtually and in reality, regardless of their location. In addition, the setup could be enriched with additional information via various data sources.